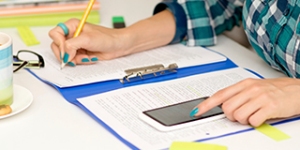 That feeling doesn’t come when you’ve simply prioritized and delayed an assignment in order to accomplish something more important first, though. That’s a good kind of “procrastination.” The hindsight that you have when finishing last minute studying only happens when you’ve truly procrastinated, or as it’s best defined, unnecessarily delayed a task.

Overcoming procrastination habits is not just about avoiding putting things off – there’s no way around that in college. It’s about no longer accepting the three-hour study bender just because you don’t feel like starting your work now, and instead prioritizing over procrastinating.

Here are four common “myths” procrastinators use, and why they don’t add up.

Often times this reasoning masks a sort of “backwards prioritizing,” where students simply increase the “importance” of one task to avoid doing the actual important one. And aside from being counterproductive, this myth ignores the possibility of switching off tasks, which can actually help you retain information. So the next time you feel you should study for a quiz you’re interested in instead of for a midterm you’re not, or that you can’t write that paper until you’ve researched and cooked a five star meal, try switching off between tasks to maximize productivity.

It’s a lot harder to find the motivation to do something when you simply don’t care about it, or when it’s too hard to even start. However, the tasks that are most difficult to accomplish are often the things we end up learning the most from – whether about the topic itself, or about ourselves. Not starting an assignment because you’re not interested in it is a “myth” because the slow start is more often than not due to something else, namely a lack of research. If you read up on a subject enough and understand a task before undertaking it, you’ll find it probably does have some relevance to you and you’ll be able to complete it faster and better than you otherwise would.

“Now is not a good time”

If you’re using this excuse, chances are there never will be a “good time,” and you know it. To overcome this you must find the time closest to a “good time” to do it, even if it’s not perfect. If you’re a morning person but don’t have time in the mornings plan to get plenty of rest before taking a task on; if you work best on weekends but don’t have the time to wait until then, prioritize and clear your schedule for an afternoon. This myth is the biggest cause for that last minute, late night study bender. Sitting down a few times for even just a half-hour of solid work can go a long way in avoiding procrastination’s pitfalls.

“I work better under pressure”

Sure, everyone surprises themselves from time to time with an 11:59 PM finish for a paper due at midnight. That doesn’t have much to do with ability though, but more a stroke of good luck. What this excuse is really saying is that you don’t have the motivation to do a task, and you’re either waiting for that motivation to magically appear, or until you have no choice but to get motivated. If you simply can’t get yourself to start early, try setting fake “deadlines” for assignments a few days before their actual deadline to motivate yourself, or at least give you some breathing room come crunch time.